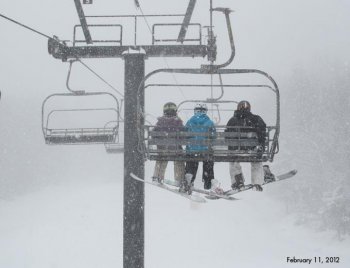 Charleston, WV – Skiers and snowboarders heading to the mountains of West Virginia right now will find two more of the state’s major ski resorts open for the 2014/2015 season.  Winterplace and Timberline opened last Friday, while Canaan Valley will open this Saturday, December 20.  Snowshoe Mountain has been open since November 26.  Oglebay Resort in Wheeling, which offers one slope for guests, will begin the season when weather permits.

Along with the natural snow in the mountains, temperatures in the higher elevations have been cold enough this week for snowmaking operations, allowing all of the resorts to provide excellent early season conditions, as the all-important holiday season looms later this month.

The snowmakers at all of the state’s ski resorts can produce manmade snow whenever temperatures permit, allowing the industry’s unsung heroes to cover the slopes for skiers and snowboarders.  When snowmaking conditions are at their best (in the low teens), over 20,000 tons of snow is being produced in West Virginia per hour, enough snow to cover 20 football fields with a foot of snow each hour.

Resorts in the mountain state annually attract over 800,000 skier visits and numbers have been strong during the first couple weeks of the season.  “It’s the time of year all of the resort operators look forward to getting open and have skiers and snowboarders head to the slopes,” says Terry Pfeiffer, President of the West Virginia Ski Areas Association and President of Winterplace. The top states providing skiers and snowboarders to West Virginia slopes are Virginia, North Carolina, Ohio and Florida.

The ski and snowboard season traditionally, weather permitting, continues from Thanksgiving through early April. The five-month long ski season in West Virginia has an estimated economic impact of over $250 million and 5,000 jobs at the resorts and other related companies.